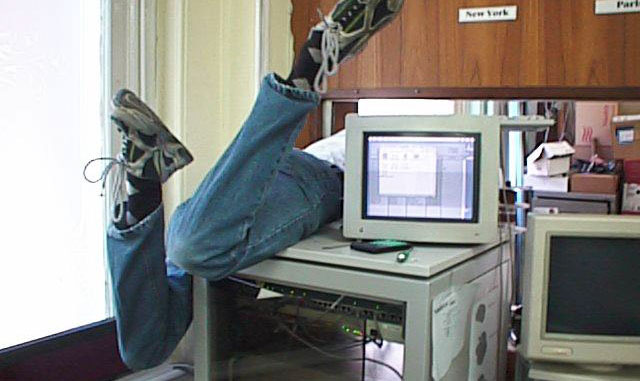 One of the longest-serving computers I have kicking around is a shell server which since 1993(ish) has hosted my email, domain names, and websites.

Of course it’s been patched and reinstalled but I never bothered actually clearing the configurations up to remove old projects. Yesterday it suffered a bit of a meltdown and I took the initiative to finally do some tidying, a process which largely involved manually going through everything bit-by-bit, line-by-line.

As much as life has changed over the past 25 years, nothing quite prepared me for watching it all be deconstructed in slow motion, long-dead projects being removed and finally consigned to an archive, leading me to consider how much I miss the days when we were flying by the seat of our pants.

When I worked for Internet service provider Mailbox Internet in the late 1990s we were particularly adept at having mad brainwaves, led by my boss at the time. “Drinkie?” he’d ask, “I’ve had an idea!” The alcoholics amongst us (of which there were several) would head to Joe’s Brasserie for a Sauvignon Blanc on the company tab, accompanied by fevered discussion of why this particular lightbulb moment would or wouldn’t work.

Every project was given a designation, prefixed with “HBS” and which stood for “Hare-Brained Scheme”. Some HBS numbers made it into full projects, some were destined to remain as a couple of lines scribbled on the back of a torn beermat. The most infamous was HBS768, a company called Nomination which in turn became CentralNic – I still have the box file somewhere in the loft.

One night we drunkenly gave thousands of dialup customers a load of webspace while logged in from the Southern Cross pub on a Nokia 9000. Another time we built a data centre which ended up full of every kind of Frankenstein’s monster of servers; it suffered the most horrific air conditioning issues yet gave rise to websites which are now household names.

The server I was now reworking saw its fair share of action in that data centre. Once upon a time it had been actively involved in work for both independent and ICANN-sanctioned domain name registries. It still had configurations to handle email for a shedload of companies whose email servers were temporarily offline and had never officially told me it had been fixed (and at least three domains whose email was still being handled there, a decade later).

The configurations led me out of the Dot Com era working for an ISP and into my life as an IT contractor, providing emergency hosting in times before virtualisation and containers became the norm. It hosted household names (including, bizarrely, Aquafresh), and a proof-of-concept for the Sky TV programme guide, written in perl. Strange weird and wonderful ideas – I mean, who the heck thought a database of tapas restaurants might be a good idea?

I now work with a woman who was born in the same year we initiated several of those projects – she’s a front-end developer who never knew a time where we didn’t have always-on connectivity of broadband. While she can spin up a VPS and get a project deployed in a few hours, she doesn’t know the joy of pointing at tin and proudly saying, “Look! These are our servers!”. Don’t get me wrong, it’s a blessing that we don’t need to worry about maintenance and suchlike, but it doesn’t feel quite the same pointing at an SSH login.

Finally, it felt I was leaving a house which had been home for decades. As I finished clearing everything up, there was a pang of regret as though I was quietly putting the lid on the Wild West era, of the Dot Com Revolution. Will there be another time like it? My old boss still allocates HBS numbers, so who knows…!

Header photo by Shish Batal, who sneakily took a photo of me fixing the emergency pager system at Mailbox back in 1998.