Around 1:30am early this morning I fell through the door after touring the show Rainbow Heart around the UK, a self-booked and self-promoted series of gigs which sought to relate the whole coming-out thing and the search for gender and sexual identity.

I’ve already covered the creative journey in a post last July, written a few days before the album came out. In August I premiered the embryonic live show at The Red Shed in Wakefield; it featured not just many of the songs from Rainbow Heart-the-album but a couple from the debut work too. It wasn’t just about the music either: there was a storyline, a sequence on coming out and the surrounding events recounted in anecdotes and discussion. But basically, it was me banging around on a piano, singing, and occasionally talking.

The August gig went well. There was a bit of airplay around the album itself and friends who’d seen the premiere and heard the album said it was “important”, “astounding” and “a voice to those who weren’t always heard”. More than that, it led to discussions after the show about gender and how we were all perceived. I resolved to perform it more.

Skip forward a month or so – I’d spent most of Summer performing works from Swoon with my poet collaborator Ralph Dartford, which gave me time to hone things a little, write more, sing and play a lot at open-mic nights. The more I sang the songs in public, the more discussion happened – education-by-osmosis, someone said. I started booking a tour: Manchester, Leeds, Birmingham and Brighton. Nottingham was a late addition. A charity gig in Wakefield gave another opportunity to try out some of the material.

Accompanied by my friend and support act Helen Rhodes (a wordsmith and spoken-word performer who stubbornly refuses to describe herself as a poet) we had a tour in the offing. Not only that but another poet friend Geneviéve L Walsh would be joining us too. I worked out a stage rig, lighting, and how we’d manage everything, with a couple of warmups at more open-mic events. For some reason, I wasn’t that stressed.

So, at the beginning of November, we headed off across the Pennines to Manchester for the first date and found ourselves in the Northern Quarter in Freshers’ Week, surrounded by very drunk 18 year-olds in a freezing cold concert room. A good opener, a little rusty, but a splendid start nontheless.

Nottingham the following night was wonderful: we racked up at The Sumac Centre, a huge Victorian house with a venue in the middle of it where we were greeted by the booking agent and general manager Tak. It’s also the first gig I’ve performed where I was standing next to a library full of anarchist, communist and left-wing books, so there you go. Even at this stage the show was evolving – different in slightly different ways every time I ran through. Tak gave us some curry powder and fed us a banging vegan chilli, too. 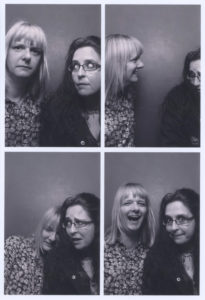 In a Brighton photobooth. Hx was somewhat hung over.

Leeds was Wharf Chambers, a venue I’m very familiar with. My best memory from this one was singing the show-closer One Foot In Front Of The Other and catching sight of five of my friends singing along and dancing offstage. Brilliant!

We took a week off, because real-life and work was in the way before recommencing in Brighton. The company I was working for had unexpectedly shut down the previous day, so I was in a bit of a kerfuffle after realising performance and writing was actually my job right now. Nevertheless we pulled up at the venue The Caroline Of Brunswick which reminded us of The Jockey in Wakefield – namely, a rock pub with a venue welded-on. The gig itself was a bit different: a couple of questions mid-set, a few discussions about what constituted identity, then after packing away we finished up dancing to cheesy pop in gay venue Legends until 4:30am. Oh my head!

Having booked a day off in Brighton (originally to work), my travelling companion Helen was ridiculously hung over therefore Friday was somewhat subdued. We ate Japanese food, sat on the beach watching starling murmurations, and sat in a photo booth.

Once it got to the Saturday it was time to head to Birmingham for our final date. Set in another social enterprise – an arts centre in Balsall Heath – we met new regulars and drank a lot of tea with old friends. In fact, I don’t think anyone was drinking alcohol – if you went “cheers!” you got a round of mugs raised!

Y’know, a year ago when I released the debut Bleeding Obvious album, I stated in an interview I wasn’t interested in doing the live circuit. It turns out it was (probably) subconsciously based on the stressful (and borderline-unpleasant experiences) with my previous band. Maybe a bit of a premature decision considering what I’ve got planned for 2018…