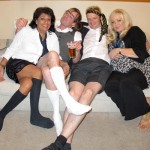 I do a lot of different ice-creams, and you do need an ice-cream maker for this one (I love my Cuisinart one but any will do). Best place for vanilla pods is actually eBay where you can get shrink-wrap Madagascan ones for a lot cheaper than the Supercook ones you get in the supermarket. You can also cheat by using a sachet of vanilla sugar and leaving the vanilla pod stage out. My notes from the day tell me this is recipe #8 without the chill stage… 😉

Easily the recipe I’ve been asked about the most. The one on telly didn’t have the brandy in because I didn’t want Jake to explode…

This serves about 8 portions because it’s so rich, and goes really well with fresh raspberries and vanilla ice-cream (which is how I served it on the show). The camera crew had quite a bit later on in the week 🙂

The full title for this was Woodland Venison With Blackberries, Roast Potato Stack & Chanteney Carrots but I guess there’s a space issue with that.

I can’t remember on timing, but experiment a bit. You can get excellent venison shoulder steaks from Leeds Market (the farm shop up Fishmongers Row is where I got mine) and it’s less expensive and tastier (in my daughter’s opinion anyway) than beef.

And now, a song courtesy of Tenpole Tudor:

As the recipes on the C4 site aren’t the ‘real’ ones, I’ll post what I actually did – here you go…

I prefer to leave the coral on the scallops, but you may want to chop them off.