Once again I find myself listing positive things that happened throughout the past year. It’s been a quieter one this time round owing to circumstances surrounding family, finances and work for both Helen and I, but there’s still been some rays of light. I think perhaps the biggest thing for me has been writing and performing, but plenty of other things happened when I actually think about it.

This, I believe, classes as not bad.

I’m also massively proud of my kids – my own two, and my stepdaughter. I won’t go into their achievements here as it’s their choice if they want to trumpet it, but all three continue to shine in their own ways and it is truly wonderful to see. 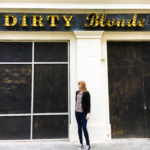 Album 3’s title, inspired by the name of a derelict nightclub in Brighton.

So where’s 2018 taking me musically? Ideally album 3 (tentatively titled Dirty Blonde), maybe towards the end of the year – I really don’t want to rush it. It’ll evolve of course, but so far it’s shaping up to be a bit more of a glittery disco celebration and had good reception when I performed two demos from it at the (sold out, cough) Christmas gig: the songs Anything, Me and One Girl Girl.

Fingers crossed I’ll be performing Rainbow Heart through the festival season – I’m dealing with bookings at the moment and confirming with venues. There are a few other ideas floating around, and various collaborations with friends pencilled in so I won’t be short of people to mess about with in front of a microphone. The overnight set I did at Chapel FM in Leeds (listen here) was well-received enough to make me think there might be mileage in a remix album, given I have a substantial unpublished back catalogue of alternative versions from Debut and Rainbow Heart. Maybe that’s one for 2019, we’ll see – I keep revisiting the idea in quieter moments.

Kit-wise I’d quite like to acquire a theremin (the Moog one looks quite cute) but other than that there’s no real “gear lust” going on. If anything I’ve pared down the studio a bit, decluttering and keeping the wolf from the door; the “music car boot sale” I went to a few months ago helped a lot. It’s interesting looking at the kit I took to the first gig of the year which was a huge car-load of synths, versus the penultimate gig which was just me and the piano.

I still have to work a day job to pay the rent – “The Arts” isn’t quite a career change yet. Unfortunately I didn’t end the year in the permanent role I’d hoped for after the core investor pulled funding – a bit of a blow, as I quite liked the place and the people I worked with. Still, I never know what might be round the corner! I’ve had to keep up a bit more with new technology and develop my skill-set, a hazard of the career I’ve chosen – languages, technologies, patterns and approaches change constantly. Or to put it more simply, you snooze you lose.

I’ll finish with the first song I wrote in 2017, and which went from being an electronic pop song to being a staple of my acoustic set at Open Mic nights – it’s from Rainbow Heart of course and might end up on an acoustic EP next year. It features the guitar-playing of my talented friend Louie James, who I first met when I started doing the Inns Of Court open mic night in October.

MIDI Control of the Behringer X32