The Demise Of The Mixtape

Similar to last year, I contributed an article for Leeds independent Jumbo Records‘ fanzine to commemorate Record Store Day 2015, carefully put together by my lovely pals Reb and Antonia – given lots of people won’t have managed to get a copy, I’ve reproduced the article here… 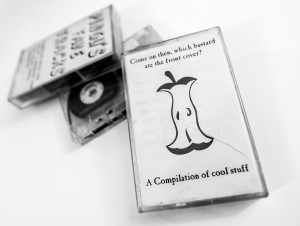 Sitting in traffic the other day, my mind wandered to a close friend and I found myself mentally assembling a compilation of “our songs”. The varied selection encompassed everything from The Divine Comedy to Dutch Uncles, subconsciously timed to last just under 90 minutes (split at 45 minutes exactly).

Over the years this ritual has been played out all over the world in the form of a “mixtape”, a C90 cassette lovingly jammed full of favourite songs intended for a friend, relative, or most likely a lover: sometimes meticulously planned, sometimes chaotically ad-hoc, usually dependent on the charts that week or what you’d discovered in your local record shop. The cover might involve creative use of a biro, a pack of Berols, or if you were computer-savvy then clip-art and weird typefaces.

In whichever form you created or received your mixtape it felt like a major event: your relationship was sealed if you received one, if you made one you were sending an unspoken message. Listening to my collection years later evokes memories aplenty: student days driving round Hull in 1993 with The Wonder Stuff and The Doors, or the eve of my first marriage through a mix of Bert Kampfaert and The New Radicals… thoughts of past and present friends, relatives, lovers, everyone in between.

Sometimes you’d not even have a favourite track on your tape: one day you might quite like Stephen Duffy, the next day you’d be really into the Levellers song. In the car you’d probably want to fast-forward through the Julia Fordham or risk being ridiculed by your mate in the passenger seat. You’d still have a mix ready in the tape player though: Now That’s What I Call Inconsistent.

Yet where are we now? I wanted to create a mixtape for my partner to give her something to listen to on the long journeys – she lives 220 miles away in Edinburgh – and pondered, how I could physically build the damn thing? Cars don’t have cassette players any more and you can never be sure if they’ll play rewriteable CDs; notwithstanding the fact you can’t crossfade on a standard CD, tracks aren’t meant to be played individually because a mixtape is a sum of its parts, the sequence almost as important as the songs themselves. I could perhaps copy a load of anonymously-titled MP3s into a directory, but then she still gets to listen individually and on shuffle… maybe I could create a Spotify playlist, but then she needs a Spotify account… the list of solutions went on, each one dismissed as unsuitable.

Eventually I did what I do for my podcast (details below, ahem) and compiled everything with Logic Pro on my Macbook, exporting the mix as a single hour-long track and attaching a bit of Photoshopped album art. I guess you could just as easily use Garageband or some other audio workstation software, but this seems so much like overkill. And it’s expensive! In this retro-loving, hipster-driven world, surely there’s a better way?

I am now utterly convinced that somewhere there’s a market for mixtapes, a C90 retro app where you’re limited to the hour-and-a-half split at 45 minutes a side. Maybe it could export a single contiguous MP3 via a virtual double-cassette deck which would also let you scribble on the label? Any takers? If someone wants to do that, an entire generation could discover these joys: so be my guest, you can have that idea as long as you can guarantee me a decent bunch of tracks occasionally. You needn’t even use your red Berol, instead saving it for the mandatory love-heart on the inlay spine.

Oh, and as a postscript, she loved the mixtape – especially the Joni Mitchell track – but that could change tomorrow.

Jess Rowbottom is a rabid fan of physical media, photographer for Leeds-List.com, software developer, writer, cook, and “the other Mum” to two fab kids who have no idea what mixtapes are. She’s responsible for the No Less Than Jess podcast, which fills your ears with stuff off her shelves every few weeks: get it on iTunes or by going to www.nolessthanjess.co.uk.

Music From The Fishbowl