It’s been almost a month since I wrote about my adventures in B&W photography and there have been some developments (pun intended) since then.

As it seemed to be a hobby which was sticking around, I invested in an Epson V700 scanner – various places including DPReview and Amateur Photographer stated that this was pretty much the best flatbed I could get. Why was I after a flatbed? Well I’d already anticipated I wanted to do some medium-format (MF) photography and most affordable slide scanners are limited to 35mm film and slides so would be useless after a while. The Epson was an investment, and proved to be an exceptional one.

Sadly what lets the Epson down is the software. It’s bundled with a package called SilverFast (version 6.6SE in the case of my purchase) which doesn’t work very well with the Apple UI and can be quite hard to use. It frequently crashed and ate a lot of CPU, and the version shipped was crippled in various ways (including being able to profile film emulsion – the entire reason I’d bought the scanner in the first place). When trying to use the support forum I came up against messages such as ‘Sorry but you cannot use search at this time. Please try again in a few minutes.’ Eventually I gave up and bought a copy of Vuescan which at a few cents shy of $40 was a lot cheaper than the SilverFast upgrade, gave better results and has a reasonable English-speaking support base. It would appear I’m not the only person to have done this switch…

So back to the photography: I did a photoshoot on Ilford Delta 3200, the subject being a punk-electro band called Minny Pops. Back in the early 80s they were on the same billing as Joy Division, they were a Martin Hannett-produced band and they were signed to Factory – hell, even Rob Gretton was involved with them; this made the act a perfect band when they played at The Brudenell Social Club in Leeds, perhaps in the style of one of my favourite photographers Kev Cummins. Here’s an example shot (dig around my Flickr stream for more), processed using Ilford Microphen high-grade developer (that particular image was picked up for publication by a UK music national which I’m quite chuffed about – still to see it ‘in the wild’ though). Not bad, and I resolved at that point to start using film a little more on gig shoots where the act would warrant it. 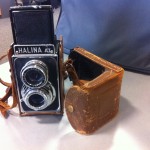 I spent most of January experimenting, and mentioned to my Grandmother what I was up to. She told me that she had a big box of photographic kit once belonging to my Grandfather and I was welcome to have a dig round and see what might be useful. It was quite a fun box-ful: the cache consisted of lots of lenses, a few USSR and GDR-manufactured 35mm bodies in varying condition, some filters and a few unexposed spools of film – but the unexpected bonus was finding a Halina A1 twin-lens reflex medium-format camera from the late 50s/early 60s… it had a spool of film inside which I wound on.

Now I’d thought about doing MF back in December, even going so far as to working out if I could afford a second-hand Bronica ETRS camera outfit, and I’d decided I would eschew the 645 format in favour of jumping straight to square 6×6 (being a substantial move from plain 35mm so I figured I’d appreciate it more). Dale Photographic in Leeds had a Hasselblad I coveted, but spending £1500 on a MF film setup rather than getting a family holiday wasn’t going to endear me to Nicky so I left it for a while. However, the whole MF thing was still bimbling in the back of my mind, and finding the Halina was timely.

I worked out a short workflow to see how it would fare – heck, I didn’t even know if it was light-tight. Thoughts of light-meters led to the brainwave of downloading one from the App Store for my iPhone (perhaps a bit of cheating, others may say ingenuity!). It hardly made a noise when the shutter activated I wasn’t even sure it was working and spent ten minutes exploring to make sure! So far so good.

The next day I wandered round the streets of Headingley with the Halina and a fresh roll of Ilford FP4+ 120-roll film. Colleagues at work were curious. I scared the living daylights out of some poor lady in St Michaels Cemetery in Headingley taking photos of gravestones (sorry missus!). Once back at home out came the dev tanks and (after following this tutorial on YouTube on loading 120 film into the Paterson tank) I ended up with some perfectly passable 6×6 medium-format negatives. The images were a lot sharper than I’d anticipated, having seen reports that this particular camera was favoured by the lomography crowd because of its soft focus – hooray!

Into the scanner. Set the controls. Forgot I set them for 35mm and of course MF has larger negs so I ended up with a gigapixel image – Lightroom struggled over it and Flickr hated it, so eventually settled on 4800dpi, 95% JPEG, 4-pass-plus-IR out of Vuescan. Here are the results (click backwards to see more I took that day) – banal subject matter but I’m very very pleased how they’ve turned out! Wonderful square high-contrast images which would make perfect album covers!

As a sidenote, you remember I mentioned that exposed film in the Halina? Purely on a whim I developed it. It was a Kodak X-Pro film (I think) and thought there wouldn’t be any harm in giving it a shot – but the bloomin’ thing dev’d fine and after scanning I saw the face of my Great-Grandfather staring at me. Blimey – I didn’t actually think almost 40 year-old film would process properly (nor had I really worked out timing for the dev tank, I just left it for 7ish minutes in Microphen). Ellie was fascinated, and we’re soliciting family members to try and date it as it’ll give us an idea when the camera was last used!

Anyway, as I left you in my last blog entry tonight I’m heading to another gig, this time to try and shoot a friend’s acoustic act in MF using Ilford HP5 which I intend to push to 1600. How I’ll get on I don’t know – this is a completely manual attempt! Even the practicalities of winding film with only the red-coloured rear window of the camera body may defeat me (given stage lighting) – maybe I should take a torch! I’ll be sure to post the results on my Flickr stream if there are some presentable images, of course.